On May 3, 2018, Lynda Holler, a patient advocate, testified before the New York State Assembly Standing Committee on Health on proposed legislation that would legalize physician-assisted suicide. The following is a transcript of Ms. Holler’s testimony:

Chairman Gottfried and Honorable Members of the Assembly Health Committee, thank you for the invitation to present my testimony today. My name is Lynda Holler and I am an expert on suffering. I have experienced it second-hand by accompanying my husband, Kenny, through 21-years of terminal head and neck cancer and I have experienced it first-hand as a caregiver struggling to keep my husband alive, raise two sons to be honest and loving men, and find meaning for my own life in the chaos. Kenny died on August 2, 2014. I come here today to this important hearing to testify in opposition to the “Medical Aid in Dying” legislation.

In January 1993, eight months into our newlywed year, Kenny was diagnosed with tongue cancer. As a 13-year veteran of the New York City Fire Department he had been exposed to cancer-causing toxins that caused his squamous cell carcinoma. Never throughout his epic battle did we ever ask percentages or time frames. We rallied together and fought each recurrence and the resulting surgeries and treatments with determination to beat “this thing.” We didn’t allow our minds to process this disease as terminal. Instead we were determined to live life as fully and normally as possible.

What we didn’t realize until at least 15 years into the journey was that doctors had not expected Kenny to live more than 5 years. His 21-year survival was miraculous.

We went on to have two sons. Kenny and I were both raised in loving, “normal” families with the opportunity to live out our formative years as carefree children and we were determined to give the same to Colin and Tim. We did not talk about the cancer with them and didn’t even have to tell them about the threat until 2012 when the disease intensified.

Kenny underwent 11 radical surgeries removing portions of his tongue, teeth and jaw bone, painful skin grafts, and a fibular free-flap to name a few. In 2003 a surgery required teeth to be removed preventing him from ever eating solid food again; his jaw bone was too brittle and his gums too delicate for him to tolerate reconstruction or bridges. For nine years I made big cauldrons of soup, pureed it and froze it in quart containers. He would eat the soup, very thin oatmeal, smoothies, milk shakes, and nutritional supplement drinks daily until his esophagus locked up in 2012 and he had to start taking all of his nutrition through a stomach tube. By January 2013 he needed a trach, which was very high maintenance and caused many wound care issues. By the end of 2013 he could longer talk. He had intense side effects from his chemo and got extremely painful infections around his finger and toenails and subsequently14 finger and toenails had to be removed. That process has not advanced much since the Japanese used it as a torture treatment.

This just touches on some of the painful physical and emotional suffering that we experienced but suffice it to know that throughout the last two years Kenny lost everything that the rest of us take for granted. He couldn’t eat, drink, breath normally, sleep for more than a couple hours at a time. He spent his last three months in hospitals, and by the end he couldn’t get out of bed and he needed to be cared for 24/7, but Kenny never stopped seeing value in his life.

As Kenny was dying in 2014, I would hear on the news about Brittany Maynard and her quest to advocate for legalized assisted suicide so that she wouldn’t have to suffer and so that her family wouldn’t have to accompany her through her suffering and I felt bad for her. I was immersed in the most painful experiences of my life, but I saw that Kenny’s suffering was very powerful and was making a big impact on everyone who encountered him; I felt bad for Brittany that she didn’t recognize that her life still had value in spite of the suffering.

Over Kenny’s last two years I especially began to recognize the impact he was making. Longtime and recent friends, family, medical professionals, even kids he coached and bare acquaintances would come up to me and tell me what he meant to them. What I recognized was this popular fireman with the big personality and quick wit had made the biggest impact on people by how he chose to suffer.

Of course I wish that Kenny could be here to tell his perspective himself, but interestingly, on Mother’s Day 2016, almost two years after he died, I found a letter that he had written in June 2012 to his childhood friend, Tom, who had just been diagnosed with cancer. Tom must have died before Kenny was able to send it. I have included his full hand-written note in the copy of my testimony and I hope you will pay Kenny the respect of reading it in its entirety later. To keep my oral testimony within the time allowed, I just want to quote a short excerpt here.

“… Your goal now is to take 1 day at a time, which is how I still live my life. Focus on the positive… A couple of hints to you:

Throughout all this, Tom, remember one thing, you’re not fighting alone…Think about all the people that you are touching right now. They are all rooting for you! There is no better feeling!”

I feel that I need to pause here and remind you that Kenny was just a regular guy. He did not escape the intense sorrow and disappointment for the way that his life was unfolding. So, in considering why our family was able to handle terminal illness better than many others, I have come to recognize that we had all of the resources we needed to be able to suffer well and succeed.

Dr. Adams, our palliative care physician explained that they look at something called Total Pain – that pain is not just physical. It can be emotional pain. Pain associated with all types of loss:  loss of roles, loss of fatherhood, loss of professional roles. It can be financial pain; the thing someone might be suffering the most with is the pain of financial worries or leaving others with financial worries. Or spiritual pain, spiritual distress.

Please also be aware that when you have cancer or any serious illness, regular life doesn’t stop. The washing machine still breaks down, we still get flat tires, and the kids still throw up in the middle of the night… It can be those things that cause us to break down, to feel that we no longer have the strength to go on.

Consider what you are asking of a terminally ill patient then, to make a life and death decision when they are at the absolute lowest point of their lives. How many of those people that would choose to kill themselves have had the benefits of total pain control that Kenny had?

New York State has a proud history of survival and service. We need to model to our residents that life has value to the very end of our natural lives. We need to provide them the services that they need to control their total pain, not try to put them out of their misery like an old dog.

New York will be better for it in exponential ways. One example I want to share is a statement from a 16 year-old boy who knew Kenny. He said:

“When I first arrived at Kenny’s wake, I was just in awe by the amount of people that showed up. I thought, ‘This man had an impact on this many people’s lives!’ When I die, I would want to have made that much of an impact, if not greater, because that’s how we should live, making that great of an impact on other people’s lives.”

Also it was interesting for me to hear some people tell me after Kenny died that they thought I was lucky. That the boys were lucky. They wouldn’t have said that five years ago. None of it made sense then. Now they see that how Kenny lived his life impacted their lives and they recognize that he would have impacted us even more deeply. They see that the boys and I are happy, joyful, living our lives with hope and purpose, so they are able to recognize the good that grew out of the suffering.

Accepting our suffering and living it out the way it was meant to unfold was liberating for us. Rather than complain or avoid suffering, we searched for its value and embraced all that life had to offer. Even the hardships. We didn’t spend precious time trying to figure out if and when Kenny should kill himself; we lived each day for all that it had to offer instead.

Consider the people that want to avoid suffering at all costs, even to the extent of suicide. This current phenomenon belies the truth:  that life has value through the joys and the sorrows.

Kenny living out his life to its natural end empowered and inspired people to live better lives, to accept their own hardships with courage and humility. When people choose to end their lives prematurely, whether it be with a bullet to the head or a lethal dose of prescription meds, it sends the opposite message.

As a loyal New Yorker, I appeal to you as our elected officials to continue our great state’s tradition of excellence and leadership by ending pursuit of the “Medical Aid in Dying” legislation once and for all and pursue instead opportunities to address the total pain of terminally ill patients. Let’s work together to empower New Yorkers to live out their lives to their natural end, the way it is meant to be. 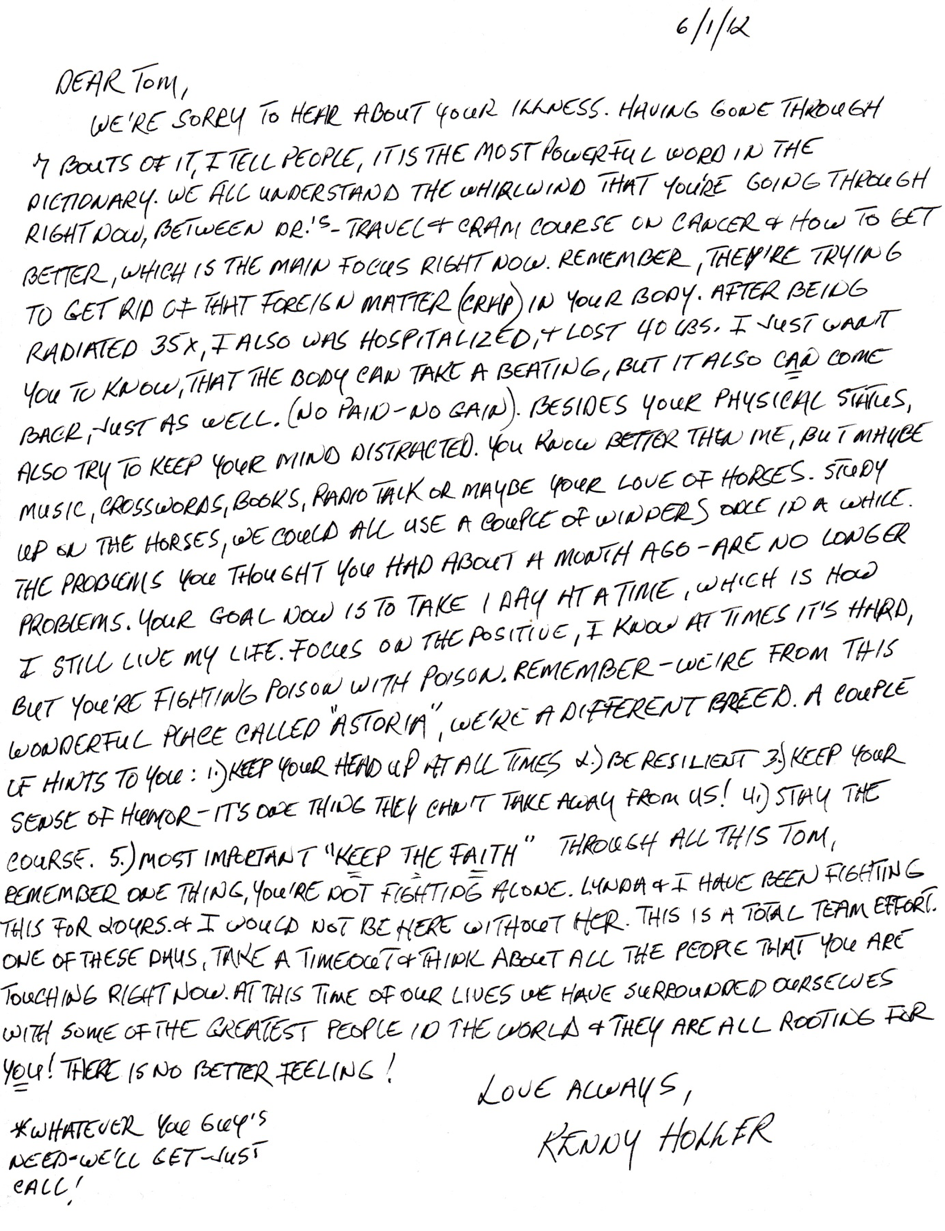